Do Solar Panels Work At Night? 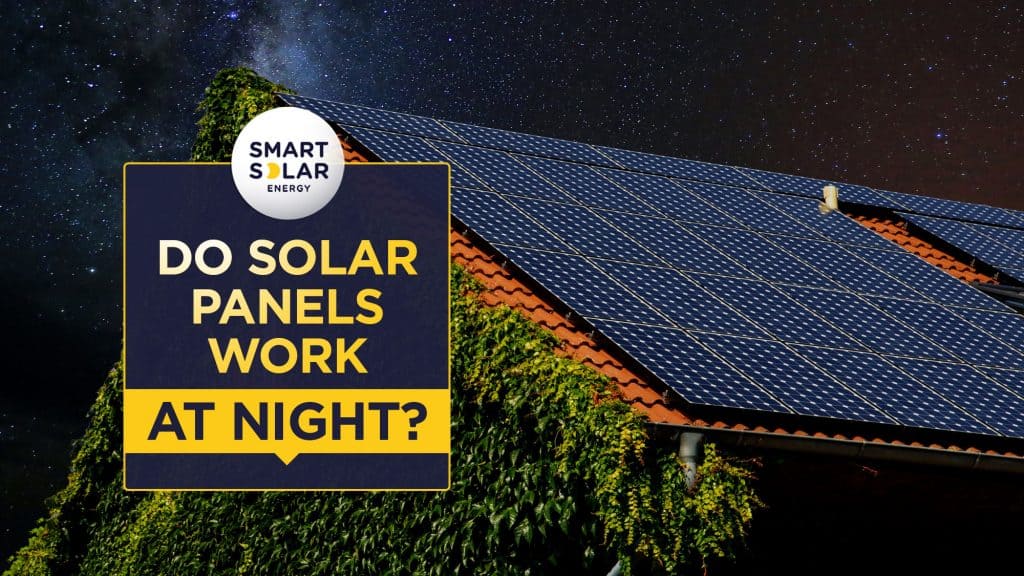 Solar panels are made up of a number of photovoltaic (PV) cells that convert sunlight into electricity. During nighttime, there is no sunlight and hence, solar panels cannot create much energy. However, that doesn’t necessarily mean that you won’t be able to power your home after dark. There are some great solutions available for homeowners who want to switch to solar but wonder how their home will be powered during nighttime or when it’s cloudy outside.

Solar panels produce the maximum amount of electricity when it’s sunny. Although they do produce energy using light from the moon, the output is extremely low. On a cloudless night, a full moon can produce 1/350,000th the energy that the sun can produce during noon. This is not nearly enough output for any practical use in a household.

Before we dig into the solutions available to homeowners wanting to power their home at night through solar, let us first understand how solar panels work.

How Do Solar Panels Work?

When photons from the sunlight hit a solar cell, the electrons are knocked loose to move freely inside the cell. The cell is constructed with a positive layer and a negative layer that combine together to generate an electric field. This electric field forces the electrons to move toward the conductive metal plates in the cell, generating an electric current. From the metal plates, the current is directed into wires and thereon, they flow like they would in any other source of electric generation. Solar panels generate direct current (DC) electricity, where electrons flow in one direction. However, most appliances in a household are powered by alternating current (AC) electricity. To convert DC electricity into usable AC electricity, a solar inverter is installed. After converting DC energy to AC energy, it sends the electricity to the breaker box, which allows the electricity to be distributed throughout the house.

Solar panels cannot generate electricity without sunlight, so they technically can’t work at night. However, when the solar panels are inactive, that is, not producing electricity, there are two indirect ways through which homeowners can continue taking the benefit of solar energy. These are: solar battery storage and net metering. 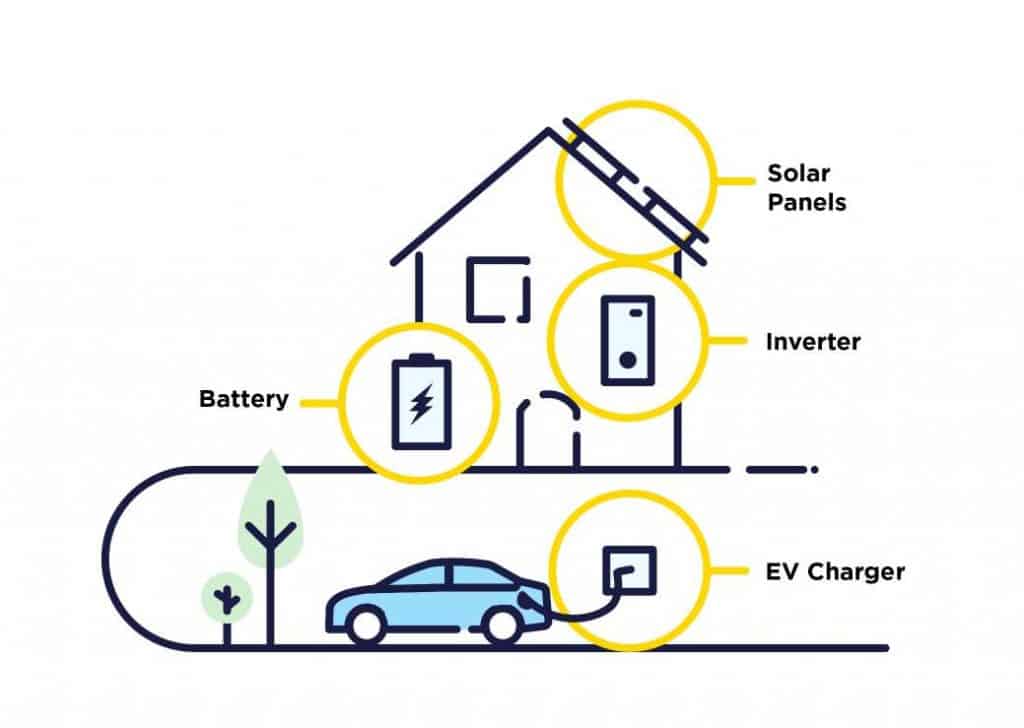 Solar panels may not produce energy at night, but the energy they produce during daytime can be stored in a battery for later use. The battery gets charged during the day when your solar panels are producing excess electricity and the stored energy can be used during the night when the panels aren’t producing electricity. Instead of sending electricity back to the grid, you can store it for your own use. Solar batteries such as Tesla Powerwall have a large enough capacity to fulfill the average household energy needs during nighttime. An added benefit of solar batteries is that they can power your home during power outages. This can provide immense peace of mind in case of a natural disaster or for homeowners who live in windy or otherwise weather-prone areas that experience a high rate of power outages.

Some homeowners have even been able to operate fully off-grid — relying completely on solar panels and solar battery systems to fulfill their electricity needs. Usually the battery system is grid-tied, but in some cases, solar batteries can be installed in parallel to maximize storage and allow homeowners to go off-grid.

One of the biggest advantages that solar batteries offer is lower electricity bills. Since you are consuming the minimum amount of electricity from the utility grid, your electricity bills will be far lower than what you’ll owe if you don’t opt for a battery backup. Most batteries tied to the grid will also smartly discharge energy during the peak hours, when the electricity demand is high and so are the prices, preventing you from paying what is essentially “surge pricing” for electricity. Similarly, it will charge during off-peak hours, when the electricity demand and prices are low, so you’ll be buying cheaper energy from the power grid. This can prove to be a big advantage to those who live in areas where the utility structure is such that electricity rates vary based on the day, time, or season.

Lastly, solar batteries are environment-friendly. They don’t produce any noise pollution, unlike generators, and allow you to  make the most of the clean energy produced by your solar panels. Most batteries will come with a standard 10-year warranty, providing great value for money.

The numerous benefits of solar battery systems make them one of the top choices for homeowners switching to solar. They’re a reliable, affordable, and sustainable source of power when your solar panels aren’t producing electricity.

Net metering (also known as net energy metering) works by connecting your solar panel system with the electric grid. When your solar panels produce more electricity than your home uses, that energy is sent to the grid in exchange for credits. The credits you receive are based on the net number of kilowatt-hours you sent back to the grid. Then, during the night or at other times when your panels are not producing enough energy, you can draw electricity from the grid and the cost will be offset by the credits you earned earlier. 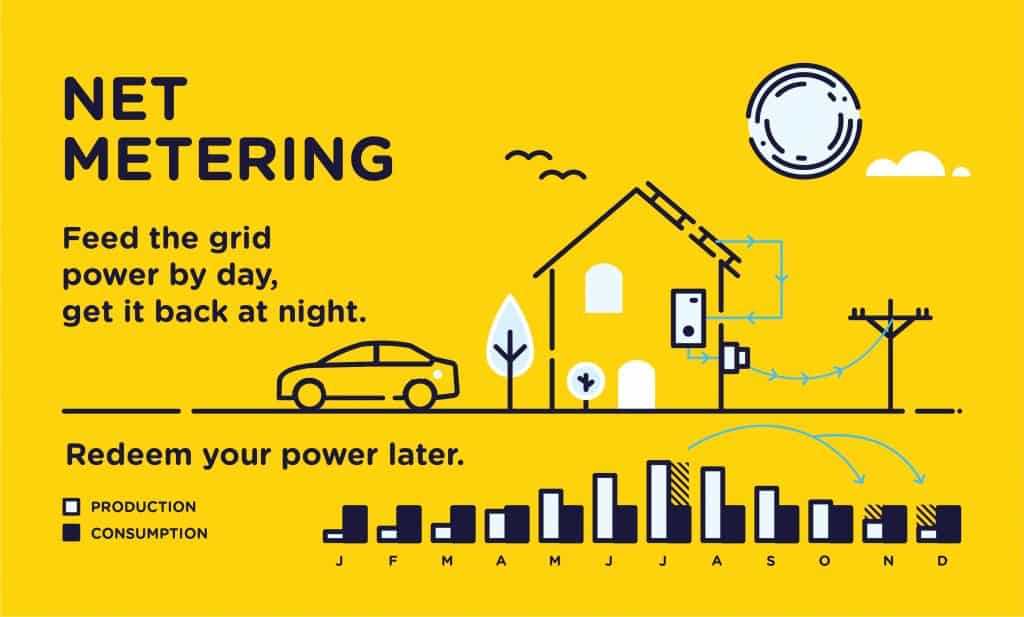 Net metering ensures that your home is connected to the utility grid even after solar panels are installed. The major benefit of the grid connection is that you will have power regardless of the fluctuations in your solar panels’ energy production. While your panels will produce the peak amount of energy during a sunny afternoon, they will be generating negligible energy during the nighttime and that is when you will be able to draw on the credits that you gained when you feeded excess electricity back to the grid.

This can help you save a ton on your electricity bills since you’re being compensated for the excess electricity you sent to the grid. In a way, net metering acts as a way of energy storage and allows you to utilize the full power produced by your solar panels.

In case you produce less electricity than you consume in a month, you can buy electricity from the grid just as you did before installing solar panels.

However, with the right size solar panel system, you will be able to generate enough electricity to power your home for the entire year.

Another advantage of net metering is that it reduces the pressure on the electric grid distribution system. When homeowners are using their own electricity, there are less people drawing energy from the grid and when the excess energy is fed back into the grid, homeowners who have not switched to solar can also benefit by using that electricity. This ultimately reduces the burden on utility power plants to meet the residents’ energy demands.

While net metering is not available in all states, it is available to residents of Oregon and Washington, allowing them to produce their own electricity and save money on their electricity bills.

The short answer is: yes, the solar panels still work when it’s cloudy or raining. However, they do not produce the same amount of energy as they would on a bright sunny afternoon. As anyone who has experienced a sunburn on an overcast day knows, the solar radiation penetrates clouds.

Depending on how blocked the sun is and the quality of your solar panels, your panels’ output will lie between 10% and 25% their normal capacity. 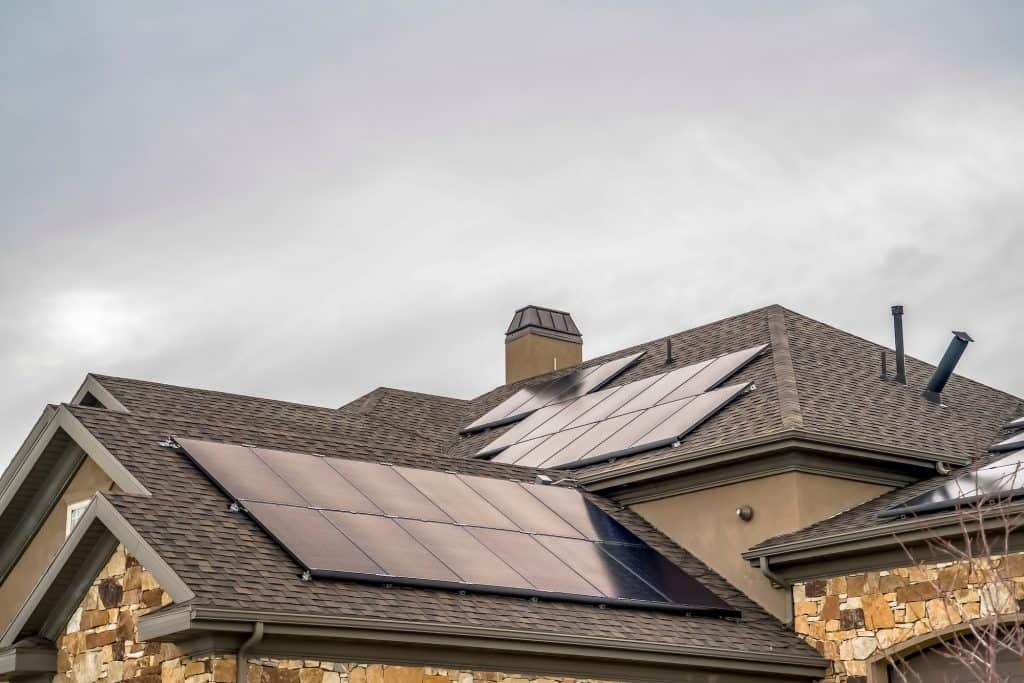 Although solar panels produce more energy on sunny days as compared to cloudy days, they don’t work best in extremely hot climates. Solar panels are typically tested at 77°F (25°C) and perform at peak efficiency between 59°F (15°C) and 95°F (35°C). They can get as hot as 149°F (65°C) which can hinder their efficiency. Solar manufacturers provide a temperature coefficient which tells you how much the solar output of your panels will decrease when the temperature increases by 1 degree over 77°F (25°C). It is expressed as a percentage per degree Celsius. So, for example, if a panel has a temperature coefficient of -0.50% per °C, then its power output will decrease by 0.5% for every degree the temperature rises above 25°C (77°F). This is why extremely high temperatures decrease the panels’ efficiency instead of boosting their performance. Conversely, if your solar panels are operating at temperatures below 25°C, the temperature coefficient will be positive and your panels will work at an increased efficiency. So, the optimal conditions for peak energy production are cold, sunny days and you don’t have to be living in a hot climate to make the most of solar energy. There are a few ways to minimize the effects of high temperatures on solar panels:

While the solar production reduces on a cloudy day, it doesn’t go down to zero. Portland is one of the top cities generating solar power despite being one of the cloudiest cities in the U.S. The long summer days with mild temperatures provide the optimal conditions for peak production and balance out the low production during the cloudy winter months. Depending on your energy needs and the solar energy system size, an occasional drop in the output will likely not pose a problem.

Solar panels rely on the photons from the sunlight to generate electricity that powers your home. Therefore, they simply cannot work at night.

This shouldn’t discourage you from going solar as you have two great options available — solar battery storage and net metering. A solar battery stores the excess energy your panels produce during the day to be used later at night. It also ensures that you have access to electricity in case the grid goes down. Moreover, solar batteries such as the Tesla Powerwall also qualify for the solar Investment Tax Credit (ITC), which significantly reduces the cost of your solar investment. Net metering is another great option for those looking for an affordable way to power their home at night. It’s a program that lets homeowners maintain a connection to the utility grid. When the solar panels generate more power than is required, the excess energy is sent back to the grid in exchange for solar credits. During times when solar panels are under-producing, you can draw electricity from the grid while the credits will offset the cost.

Both these solutions allow homeowners to use solar power around the clock and maximize their savings.

Going solar and researching all the options may seem like a daunting task, which is why Smart Solar Energy Co. offers a free solar audit to our customers so that they can be well-informed to make a smart choice. You can request your free solar audit here.