How Much Energy Does A Solar Panel Produce? 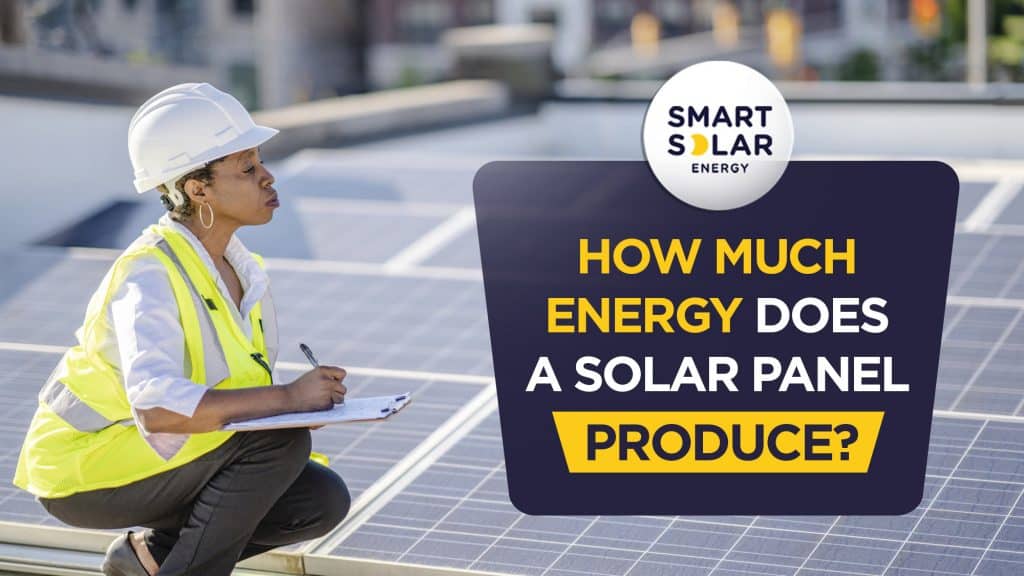 Solar energy has become a popular alternative to conventional electricity in recent years. As more people become concerned about the environment, switching to a cleaner source of energy has grown in popularity. The decline in solar prices has also been one of the major drivers of growth in residential solar. It is expected that the total PV capacity installed in the U.S. will more than double over the next five years as the demand for solar continues to grow, especially amongst homeowners.

At Smart Solar Energy Co., customers who are considering switching to solar often ask if solar panels will be able to completely power their home, and if solar panels will generate enough energy to fulfill their family’s needs. To find the answer, you must first assess your current energy needs and set your goals accordingly. For example, you might want to cover 100% of your energy needs through solar, or maybe you need solar to fulfill just 50% of your requirement. Depending on your personal needs, your installer will suggest a solar panel system of the appropriate size. The typical size of a residential PV system in the U.S. is 5 kW.

To calculate how many panels your home would require, it’s important to know how much energy a single panel is capable of producing. The power output of a solar panel can be influenced by a variety of factors. However, solar technology has come a long way since the first PV cell was developed at Bell Labs in 1954. Today, solar cells are much cheaper and efficient than they used to be some decades ago. The more energy a single panel can produce, the fewer panels will be required to power your household. Let us first understand what the solar panels are made of. 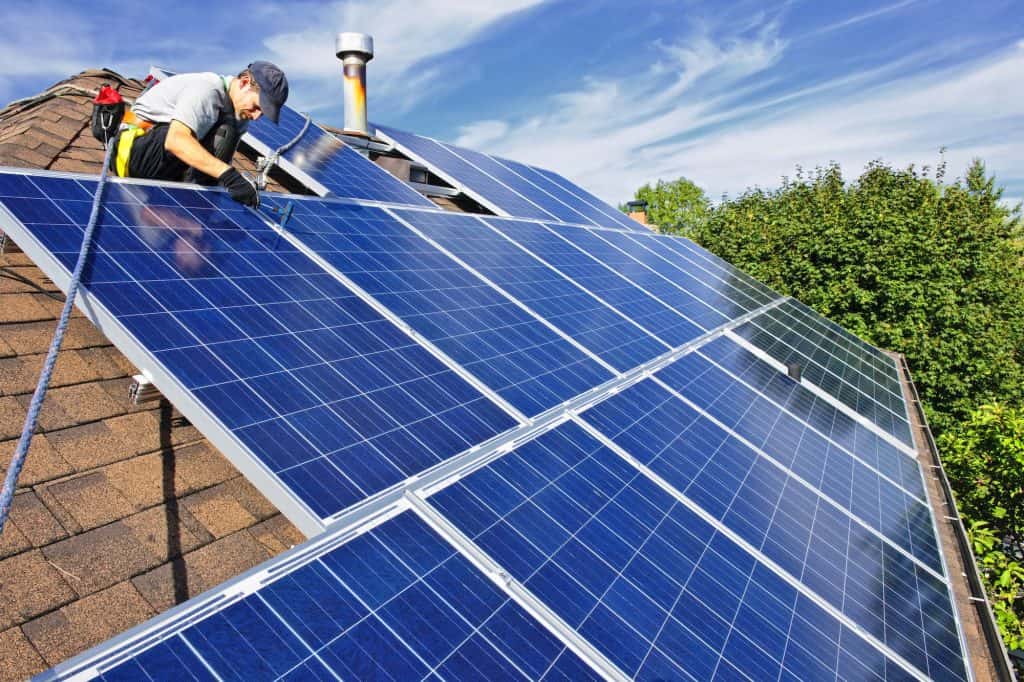 What Are Solar Panels Made Of?

Solar panels are made of a few key components: silicon, metal, and glass. Silicon is used to create thin wafers that make up the solar cells — devices that convert light energy into electricity. It’s a semiconductor material that offers several benefits over other materials. It is available in abundance, non-toxic to humans and the environment, and has high efficiency. A single solar cell can only power a small gadget, hence many units of photovoltaic (PV) cells are connected in series in a solar module to produce more energy.

Solar cells rely on photons to work. The more sunlight they can absorb, the more electricity they can generate. However, uncoated silicon solar cells will reflect as much as 30% of the sunlight, leading to a loss of photons. This is why solar cells are coated with an anti-reflective material. The coating ensures that the cells can work at maximum efficiency. Additionally, the panels also have a glass casing to increase durability and protect them from damage.

Lastly, the solar panels are fitted with a metal frame, typically made of aluminum, which protects the internal components as well as provides mounting attachment points. Frames are necessary to provide structural stability to the overall setup.

How Do Solar Panels Generate Energy?

You probably already know that the silicon solar panels installed on your roof convert sunlight into electricity. However, there’s actual science behind this whole process.

The solar cells are made of silicon, which is a semi-conductive material. When the direct sunlight falls on these cells, the energy from light, in the form of photons, is absorbed and the electrons in the silicon cell loosen up. The PV cell is manufactured in such a way that one side has a net positive charge and the other side has a net negative charge to generate an electric field. This electric field forces the loose electrons to flow in a specific direction — towards the conductive metal plates on the sides of the cell. This flow of electrons is known as an energy current, and the strength of the current determines how much electricity each cell can produce. From the metal plates, the electrons are transferred to wires. Thereon the electrons can flow like any other source of electricity.

Solar panels produce direct current (DC), which is a form of electricity where electrons flow in one direction, from the negative to the positive terminals of an electrical circuit. DC works well to power small gadgets like a flashlight, but it is not strong enough to power an entire household. Homes are typically powered by alternating current (AC). As opposed to DC, the electrons change their direction of flow periodically in AC. Therefore, an inverter is required to convert the DC energy generated by solar panels into AC energy. Most appliances that you use are also powered by AC since it can be transferred over long distances without any loss of energy, and it’s a safer form of energy. Once the inverter has converted electricity received from panels into usable electricity (AC), it is sent to the breaker box and distributed in the house as required.

Unused electricity can either be stored in a backup battery or sent back to the utility grid. Most homeowners can receive credits for the excess electricity generated through a process called net metering.

How Much Energy Does a Solar Panel Really Produce?

Depending on how much direct current power a panel can generate, their output differs. The solar panel output is expressed in terms of watts (W) and represents how much power a panel can produce under ideal temperature and sunlight conditions. Solar panels receive their wattage rating based on the power they generate under standard test conditions. Solar panels are tested in a laboratory setting where the temperature of the cells is set to 77 degrees Fahrenheit and there are 1000 watts of light energy per square meter falling on the panel, referred to as solar irradiance. So, a 250-watt solar panel will produce 250 watts of power under perfect conditions. Standard test conditions create uniform conditions for panels to be tested which allow objective comparison between different solar panels.

Most solar panels you’ll find on the market today will have an output rating somewhere between 250 and 400 watts. Higher ratings are preferred to lower ratings, because the more output a solar panel can produce, the fewer solar panels you will need to power your home.

However, the conditions under which solar panels operate differ from the lab conditions they are tested in. This could create a difference between their output ratings and the actual output they produce. Even so, power ratings act as an important metric to compare the performance of two solar panels. For example, a 300-watt panel will produce around 20% more energy than a 250-watt panel, even if they perform differently than their actual power ratings.

As we mentioned earlier, silicon is used to manufacture solar cells that convert sunlight into electricity. Based on the type of silicon used, the solar panel will differ in its efficiency. There are two types of silicon used in solar cells – monocrystalline and polycrystalline. Both have their own characteristics, which give a different appearance to the panel and differ in efficiency even though their basic functioning is the same.

These are the oldest type of panels and most widely used in residential solar energy systems. In monocrystalline solar panels, each silicon wafer inside the solar cell is made of a single crystal of silicon. The manufacturing process is known as the Czochralski method whereby a single crystal (seed crystal) of silicon is placed in a vat of molten silicon.

Monocrystalline panels are the most preferred panels for residential systems because they are highly efficient and have a large power capacity. Their efficiencies range between 17% and 22%. Since monocrystalline panels are made out of a single crystal of silicon, it provides the electrons more room to move for a better electricity flow. This is why they have higher efficiencies. They will also take up less space and provide more output.

Due to the manufacturing process and higher power rating, monocrystalline solar panels cost slightly more than other types of panels. They appear black in color due to the way sunlight interacts with pure silicon. The solar cells are black in color but the back sheets and frames are available in a variety of colors. 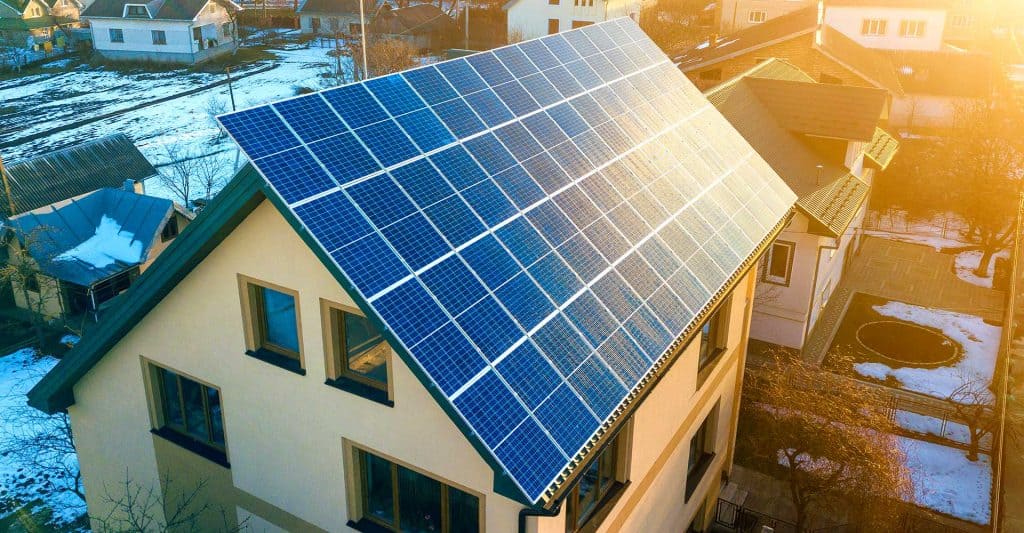 Besides monocrystalline and polycrystalline solar panels, the most recent type of panels developed are thin-film solar panels. The unique thing about these panels is that they aren’t always made from silicon; rather, they can be manufactured using a variety of materials such as cadmium telluride (CdTe), amorphous silicon (a-Si), and Copper Indium Gallium Selenide (CIGS).

The manufacturing process behind thin-film panels includes placing a layer of the main material between thin sheets of transparent conducting layers. They are then covered with a layer of glass on top for protection. Depending on the type of material used, thin-film solar panels can appear either blue or black.

Thin-film panels are the least preferred since their efficiency is very low, ranging between 10% and 13%. Due to their low performance, their cost is also significantly lower than the other two options. Research to increase their efficiency and power capacity is ongoing, but currently, thin-film solar panels do not make sense for residential solar.

An average American household consumes around 10,649 kilowatt-hours (kWh) of electricity per year, or around 887 kWh of electricity per month. A 5 kW solar panel system covering 400 square feet of space can produce anywhere between 350 kWh and 850 kWh of energy per month. Therefore, it is possible to cover your entire electricity usage through solar panels. Of course, the size of your system may vary depending on your energy needs and various other factors such as the size of your roof, the location of your home, etc. Even if your solar system doesn’t produce enough energy to power your entire home, investing in solar will still drastically reduce your energy costs.

With solar prices at their lowest and panel efficiency at its highest, there has never been a better time to switch to solar power.

You can request a free solar audit here to get an accurate estimate for your home’s solar energy production capacity, an audit of your overall energy needs, and to learn more about solar options available to you.

GET A FREE SOLAR AUDIT
PrevPreviousWill Solar Panels Damage My Roof?
NextYou Don’t Need To Offset Your Entire Power Bill To Save Money With SolarNext