What Is a Grid-Tied Solar System? 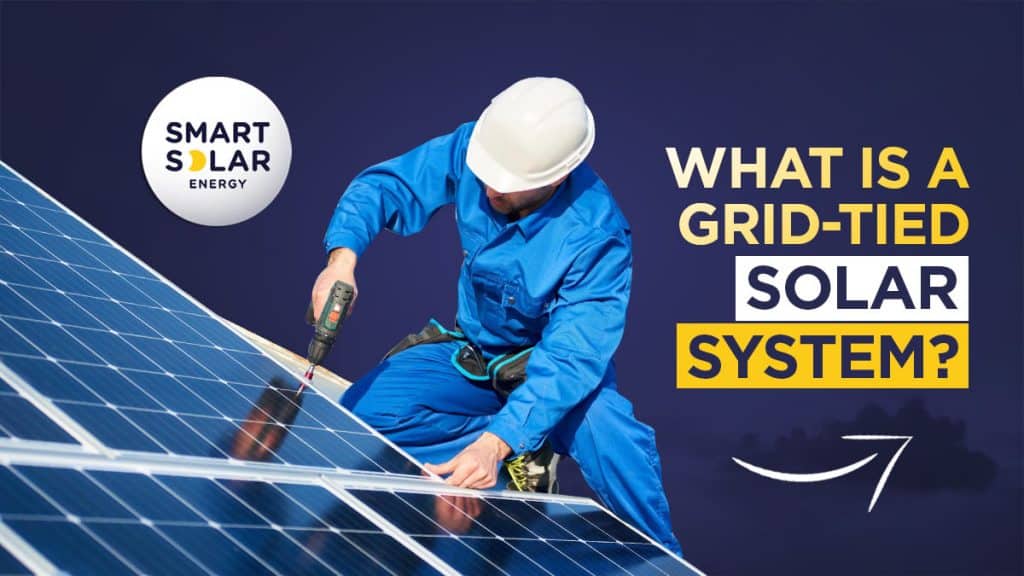 When you choose to go solar, you can choose between a grid-tied solar system and an off-grid system. Below, we’ll explain the differences—including the reasons why most people opt for grid tied solar systems.

A grid-tied solar system is the most common type of system. Grid-tied means the solar system is connected to the city’s power grid. When your electricity use is higher than what your solar panels produce—which is typical in the Pacific Northwest—the power grid supplements your energy production so you don’t lose power.

In most states, homeowners with grid-tied solar systems receive energy credits in exchange for the excess power that their systems produce. This incentive, called net energy metering, is in place in Oregon and Washington, and it reduces the cost of your energy bills significantly.

Grid-tied systems are cheaper to install and come with the incentive of net energy metering to reduce the costs of going solar long-term, making grid-tied systems the more inexpensive option by a long shot. Homeowners with grid-tied systems are typically able to pay their systems off much more quickly than those with off-grid systems, due to the cheaper install cost and the significant monthly cost reduction that net metering provides

An off-grid solar system is relatively uncommon. Off-grid systems are, as you might have guessed, not connected to the utility grid. Instead, homeowners with off-grid systems must purchase a battery to store excess energy. When the home’s solar panels are producing little energy, such as at night or in the darker winter months, the battery’s stored energy provides the home’s power.

Off-grid systems are far more expensive to install due to the additional components needed. In the Pacific Northwest, additional power is almost always needed to supplement a home’s solar panels. For off-grid systems, this energy must be supplied by additional solar panels installed elsewhere on the property, a second battery, and/or a generator, since the additional energy is not coming in from the power grid.

Very few homeowners are in a situation where going off-grid is the only option. Even those in rural areas are typically able to connect to the utility grid, including those in Eastern Washington, Eastern Oregon, and rural parts of Idaho. Typically, going off-grid is not a necessity; rather, it is a personal choice based on a desire for complete self-reliance.

A grid-tied solar system with a battery, or a hybrid system, offers a little bit of both types of systems. Hybrid systems allow homeowners to take advantage of net energy metering, yet they are able to remain self-sufficient if the power grid goes down. If the power grid goes down, hybrid solar systems will continue to operate by drawing power from the system’s battery. 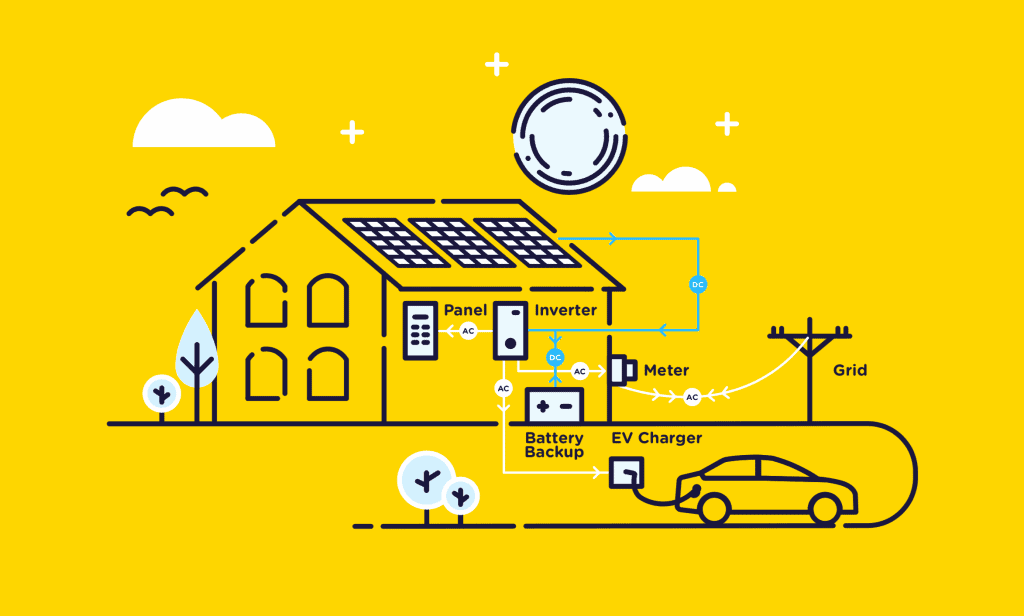 Components of a Grid-Tied Solar System

Solar Panels: Solar panels are the most important element of a solar system. The configuration of any system, including the number of solar panels, depends on the home and its roof size, orientation, and the total sunlight and shade the roof receives. When you go solar with Smart Solar Energy Co., you’ll get the best German-engineered solar panels, which come with a 25-year warranty and a guarantee that the panels will not lose more than 15% of their production power. The size and quantity of solar panels in each system determines the overall production power of the system. In the Pacific Northwest, the production power of a home’s solar panels typically is not enough to fully power a home, but the advantage of a grid-tied system is that the power grid supplements your home’s production power, and your energy bill will still be greatly reduced.

Grid-Tie Solar Inverters: Solar panels create direct current (DC) energy, which is unusable, so the solar inverter converts this energy into alternating current (AC) energy to make the energy usable. Grid tie inverters are sometimes referred to as PV inverters or solar converters. Grid-specific solar inverters for grid-tied systems allow the AC energy to flow into your home as well as the power grid.

Optional Solar Batteries: A solar battery is an optional component, and it tends to be the most expensive. Batteries are only required for off-grid systems—they are not necessary for grid-tied systems. However, there are several reasons homeowners sometimes opt for a solar battery with a grid-tied system. As a supplemental energy source, a solar battery will ensure you still have power in the event that the power grid goes down. Some homeowners with grid-tied systems have opted to install batteries to store their excess energy, in order to avoid giving energy back to the electrical grid. This is most common in locales where net energy metering incentives have been reduced, and the homeowners would rather bank their excess energy than give it back to the grid (because they will get fewer energy credits back in return). Whether this is a good financial strategy depends on your utility company and their current net energy metering exchange ratio. Batteries can also be used to circumvent Time of Use (ToU) billing from the energy company. ToU billing charges homeowners more for using energy during peak hours. A battery array can be configured to power your home during these times to avoid the energy company’s higher ToU rates.

There is also an option of things like a Tesla Powerwall, but we will get into that in a different article soon.

Optional Solar Charge Converter: A charge converter is essential in homes that have a solar battery. If you opt for a hybrid grid-tied system with a battery, you will need a solar charge converter. Charge converters ensure your stored energy is being used efficiently by controlling the current and voltage to the battery, safeguarding against damage and overcharging.

For a comprehensive cost breakdown and an overview of your home’s solar production power, get one of our free solar audits.

GET YOUR FREE SOLAR AUDIT

In the Pacific Northwest, it is rare to build a solar system that can completely power an entire home. The size of your home’s system depends on the amount of sun and shade you receive, and the size and orientation of your roof. Oregon and Washington homes rarely have enough roof space, nor do they get enough sunlight for solar power systems with the production power to offset an entire home’s complete energy needs. As an example, if your roof can accommodate a solar electric system that produces 7 kWh, but you require 10 kWh to fully power your home, you will need supplemental energy.

That’s where the power grid comes in! When your system is connected to the grid, you’ll have a steady supply of energy, even when your solar panels are producing less than your home consumes, such as in the winter or at night. Grid-tied systems are incredibly reliable, which is one of the reasons they’re so popular. The utility grid basically acts as your backup battery—but you don’t have to pay any upfront costs for it.

Grid-tied systems, because they are so standard, require very little maintenance or ongoing care. Conversely, those with off-grid systems have to study up on their electrochemistry in order to maintain their batteries properly. Additionally, batteries degrade over time; when you are relying on the utility grid instead of your own battery for backup power, you don’t have to worry about the grid’s efficiency.

Because grid-tied systems are so reliable, you don’t have to worry about using too much energy. You can continue turning lights on and charging your devices as you always have. The best part? You’re still making a big difference for the environment, without changing anything except your energy source. Conversely, those who opt for off-grid systems don’t always get to maintain every element of their modern lifestyles—in order to ensure they don’t use too much energy, off-grid homeowners sometimes have to adjust the way they live to be far more energy efficient.

Although grid-tied systems are our favorite way to go solar, as with everything, these systems do come with some cons:

The most notable disadvantage of grid-tied systems is that when the utility grid goes down, your system will go down as well, unless you have a hybrid system with a backup battery or battery array. This can be an important consideration for homeowners in areas with frequent weather-related power outages, like the Washington and Oregon coasts, or in more rural areas, where downed power lines don’t get serviced as quickly.

When you have a grid-tied solar system, you are still beholden to the utility company’s policies, even though you’re producing most of your own power. This means you may have to pay service fees, ToU charges (the increased rates in place during the hours of the day when electricity is in highest demand). With a grid-tied system, you may still incur these fees, depending on your utility company. Utilities increase at about twice the rate of inflation each year, and you’ll still pay some of these costs when you use power beyond what your solar panels produce. However, despite these disadvantages, grid-tied systems are still far less expensive than off-grid systems. This is primarily because of the high price of backup generators, batteries, and complex installation of off-grid solar systems.

Where is Solar is Headed? Grid-Tied, Off-Grid, or Hybrid Systems?

Solar technology is currently at its peak, and the available incentives for going solar are the best they are going to get. We encourage all of our homeowners go solar now, before any incentives change. Right now, the federal tax rebate for solar is a 26% dollar-for-dollar match. In 2021, this match will be reduced to 22%, and it will continue to decrease every year thereafter.

However, homeowners who switch to solar right now will be locked into whatever net energy metering ratio your utility company currently offers. This means that if your utility company currently offers 100% equal credits for solar, but they begin offering 50% credits a year after you go solar, you’ll still experience the 1-for-1 energy credit that was in place when you made the switch.

Some homeowners already live somewhere where their utility company has reduced the credits they offer for grid-tied solar energy systems. In these cases, we advise our customers to install hybrid grid-tied solar panel systems. We can design the system to ensure that you never produce more energy than the home requires overall, and we will install a solar battery backup to capture any additional energy that your panels produce in the sunnier months. These hybrid systems allow you to save on your utility bill by switching to solar and reducing the amount you consume from the power grid, while also preventing your system from sending any power to the utility company. Instead, the extra energy produced by your solar panels will stored in your battery, so you won’t lose out on the value of the energy you produce. As an additional bonus to opting for a hybrid system like this, you won’t be affected by power outages.

As utility companies begin to adopt a reduction in the value of net energy metering, more homeowners will opt for hybrid systems that retain excess produced energy in a battery, instead of than sending extra energy to the power grid. Right now, with the typical 1-for-1 net energy metering incentive and the 26% federal tax credit in place, there has never been a better time to go solar. Incentives are only going to get smaller year after year.

To take advantage of the current incentives and understand the best type of system for your home, book one of our free solar audits today.

GET YOUR FREE SOLAR AUDIT
PrevPreviousHow Long Do Solar Panels Last?
NextIs Solar Power Worth It in 2021?Next